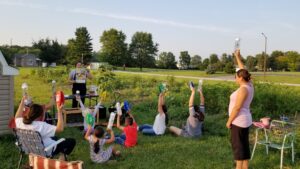 Tucked behind a church, in a quiet corner of, grows a garden that is home to a community of learners. There, Nutrition Education Program Advisor Veronica Briles, who serves Huntington, Wells, and Allen counties, nurtures both the plants and her Spanish-speaking students.

“They love it,” Veronica said. “The kids really love it. They can run and play and learn. It is a safe place for them. The Spanish community is always left behind all the time. We say, ‘This is your place. You belong here. You are home.'”

Veronica discovered the garden as she was looking for places to teach. The Warren Community Garden, which produces food for two area food pantries, needed volunteers. Veronica needed contacts. It was a perfect match.

Veronica has been at the site for seven years. She teaches the CATCH (Coordinated Approach to Child Health) curriculum to her younger students and Eat Smart, Move More to their parents and grandparents. The parents listen and participate as she teaches CATCH. When she moves to the older class, her younger students play within sight.

“They love the class,” Veronica said of her younger students. “They say, ‘We like coming because we can play and run.’ A 10-year-old told me, ‘I like this class because I don’t have to sit forever. I can play and I like to play.’”

Currently, she has six younger students between 5 and 15 and three adults. She said it is difficult to reach the adults “because the parents work all of the time.” But the parents who attend are very involved.

The garden, planted years ago as an extension project, is designed to be relatable. It features sections that boast ethnic ingredients. For example, the “sofritas patch” features onions, tomatoes, garlic, cilantro, and peppers. The Italian area has similar ingredients and basil. The garden also grows zucchini, eggplant, sweet potatoes, summer squash, watermelon, and other goodies. The fresh produce often makes an appearance in Veronica’s lessons.

As part of her CATCH Beverages class, Veronica made fruit-flavored water combining blueberries and limes with cucumbers, stevia and mint harvested from the garden. “It had no sugar at all,” Veronica said. “But it was sweet because the stevia leaf is very sweet. It was really good. They liked it.” 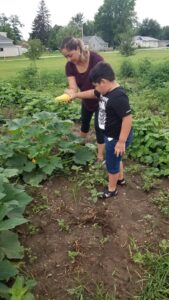 In addition to teaching the traditional lessons, Veronica shows her students how to harvest the produce. That produce is shared with the communities through Love Inc. of Huntington County and the Warren Food Pantry.

Veronica celebrated a recent victory when a local mother heard about the class and brought her 5-year-old son, George. Because of his fear of bees, George refused to play outdoors for years. But Veronica not only persuaded the boy to stay for the class, she convinced him to visit the garden, touch a plant leaf, and helped him harvest a summer squash. Still a little timid, the boy is beginning to play with the other children as part of the class.

“It was sad,” Veronica said. “He was scared to go into the garden. But he is starting to change. He sees all of the other kids having fun and he wants to join them.”